Serving the Tri-State area since 1929 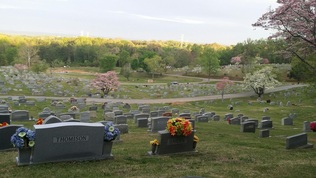 Nested along the side of Missionary Ridge near Rossville, GA, this 50 acre cemetery
has served families of North Georgia and Southeast Tennessee since 1929.
During the civil war, the site was used as a temporary camp, and later the hillsides
were planted in grapes by vineyard owner named Schmidt.

The concept of a perpetual-care cemetery on the property is attributed to a partnership
of four businessmen, Mr. Mack Beavers, Mr. Frank Gleason, Mr. John Rhyne, Mr. R.W. Flegal.

According to the records, the first two interments were Mrs. Carolyne Schuler, March 11th, 1929
and Nancy J. Hughes June 10th, 1929. Later, in 1946, the business was purchased by Mrs. Laura McCormack. This remarkable lady is credited with developing the park to its present capacity. She served many families during her time, often relying on
her extraordinary ability to remember people and location of the graves. Mrs. McCormack lived to be 91 years old and was laid to rest in the beautiful
Masonic section of the cemetery.